fun facts about tony and l-a 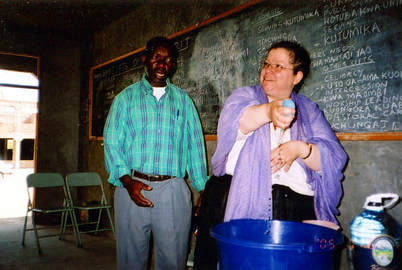 Laurie-Ann sharing during the same mission about soaking prayer.  She originally adopted this from Nicky Gumbel's talks on the Holy Spirit weekend of the Alpha Course.  She used to carry a little sponge in her purse to give this talk at any time.  One of the ladies in Lahore Pakistan noticed a sponge in L-A's purse, which prompted another talk.  When Tony and Laurie-Ann visited a Sierra Leone prison, very little was allowed to go in with her.  In fact, Tony and Laurie-Ann were separated so she could only go to the women.  She was allowed the sponge and the Bible.  So while Tony and the other male team members had extended African greetings in their area, L-A was allowed to preach and sing using the sponge, the Bible, and prophetic words!  She had to rely on God, and this was a good place to be.  God is faithful and does not let us down.

Laurie-Ann took her folding walking stick to Mozambique and South Africa in 2016.  This stick has always attracted interest. Where did she get that flowered walking stick?  Laurie-Ann shares: "I get asked this ALL the time, no matter what country I am in. I bought it in a National Trust shop in Seahouses, a village in Northumberland, England.  I got it initially to make the walking easier near Hadrian's Wall, but I found it very essential as a travel cane since it folds up.  There is something similar in the National Trust online store, but it doesn't have the flowers.  Folding walking sticks can also be found in home care stores.  In Ontario, Canada, one such store is Shopper's Home Health (a side store to Shopper's Drug Mart).
In case you find the National Trust link helpful, I will post it here:"  I also travelled with a walkstool (small folding stool) so I could rest during walks around townships and neighbourhoods more comfortably.
National Trust walking stick